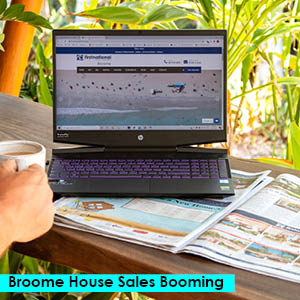 According to ABC Kimberley the latest real estate data shows a tightening of the rental market in Broome, but a spike in house sales in the September quarter. Unfortunately the Real Estate Institute of WA Quarterly Report only includes data on the northern towns of Broome, Port Hedland, and Karratha, as the other markets are considered too small to be statistically reliable.

The data shows house sales in Broome increased 64 per cent since the June quarter. The median house price has remained steady, nudging up just 0.5 per cent to $450,000. While it's thought COVID-19 may have distorted the sales patterns, the upwards trend is reflected in the year-on-year data as well.

REIWA president Damien Collins says the big bumps is the Karratha and Kalgoorlie markets are likely linked to the resources sector. "The significant increase we are seeing in some of the mining regional centres is partly due to the commitments mining companies have made to keep workers in WA since COVID-19 restrictions were introduced,” he said.

There's also been a tightening of rental markets across regional WA. In Broome, the number of rental listings dropped 49 per cent over the last three months.

Like an up to date opinion on the value of your property? Click here to arrange a complimentary no obligation sales or rent market appraisal.