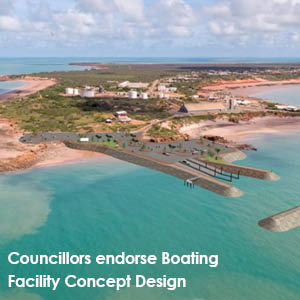 The Shire of Broome Council has endorsed the latest concept design for the Broome Boating Facility, with a Business Case to now be prepared for potential State Government funding.

The development of a new boating facility in Broome has long been considered essential to address critical safety and access issues. Numerous locations and designs have been considered in the past, with the current proposal including a facility at Entrance Point that includes four ramp lanes and two finger jetties. 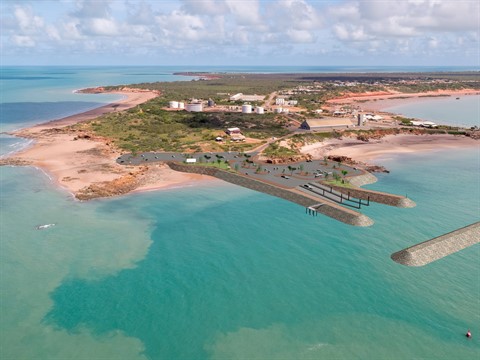 A community survey in March and April was taken by 1221 people, with 74.2 per cent of respondents supporting the concept. Since then, the Shire and Department of Transport have taken on board that feedback from the community and made changes to the design that include public open space areas, shade shelters, toilets, public artwork and interpretation opportunities, fish cleaning, fishing platforms, universal beach access and avoidance of important rock formations.

Importantly the new design ensures the project will have no impact on the important dinosaur trackways near the proposed site. Shire councillors heard on Wednesday night that Broome’s traditional owners, Nyamba Buru Yawuru, and the Dinosaur Coast Management Group had written letters in support of the project.

Shire of Broome president Harold Tracey said the Council had made a considered and measured decision on a piece of infrastructure that was sorely needed. “The results of our community survey were emphatic – the Broome community has given us the mandate to provide safer boating facilities and that is what we are committed to delivering,” he said.

“The consultation with major stakeholders and the community has been extensive over many years and the overwhelming sentiment is one of support for the project. We have had so many near misses with other iterations of a safe boating facility in the past, only for the heartbreak of fatal flaws to send us back to the drawing board. This concept design is the best option; in our recent Community Perceptions Survey, better boating facilities was the number one infrastructure priority for respondents. Delivering safer boating facilities is one of my main objectives as Shire president and I am delighted that we can progress to the next stage in the process.”

The Department of Transport will now create a Business Case for the State Government’s consideration. With remaining State Government funds, the Shire of Broome will work with Yawuru, the Dinosaur Coast Management Group and the wider community in the planning of the associated public open spaces and amenities.