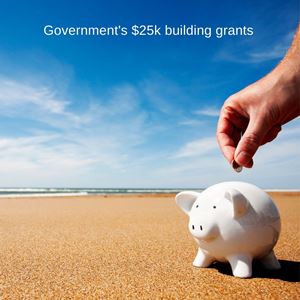 Builders, construction companies and developers have welcomed the Federal Government’s $25,000 HomeBuilder scheme as a stop-gap for the struggling industry and a “catalyst” for hesitant homeowners to take action in the COVID climate.

The government’s $680 million cash injection will give $25,000 to around 27,000 eligible home buyers and owner-occupiers between now and 31 December 2020, to boost the residential construction industry as it reels from coronavirus. Recipients will be able to build a new home, buy an apartment off-the-plan for up to $750,000, or substantially renovate their existing homes within a project price range of $150,000 to $750,000, with a property value of no more than $1.5 million. Income caps will apply, of $125,000 for singles and $200,000 for couples, and both first and subsequent home buyers are eligible.

In a press conference on Thursday, Prime Minister Scott Morrison said the scheme would provide a “tradie-led recovery” for the economy. “If you’ve been putting off that renovation or new build, the extra $25,000 we’re putting on the table along with record low interest rates means now’s the time to get started,” Mr Morrison said.

Property developers have welcomed the short-term stimulus package as an opportunity for a cross-section of buyers and a jolt of momentum for the market. Stephanie Vanin, general manager of residential sales at Stockland, said the early read from the house and land developer had been “really positive”. “Given how important the property industry is to the economy, it’s pleasing because it’ll create more momentum in the market to drive economic growth,” Ms Vanin said. “It’s going to give an opportunity for people who are looking for an affordable way into the market, and in a low interest rate environment, it’ll give that extra push. The fact it’s talking to more than first home buyers is positive, too. As long as we as an industry provide affordable options, and buyers have access to that, it’s a win-win for everybody.”

Paul Wolff, managing director of Porter Davis Homes, said he was “extremely excited” to see some urgency come back into the market, to counteract much of the “cold feet” experienced during the past few months. “The grant opens up the market to a greater cost cross-section – from first home buyers then to subsequent buyers who can knock-down and rebuild or greenfield upgraders,” Mr Wolff said. “We’ve got multiple opportunities where the grant could be used – particularly for people who were already in the pipeline to come back on board. The levels of interest during COVID were quite extraordinary; it’s a resilient market. [$25,000] is a sensible amount to offer – we need to consider what happens at the other end when the stimulus ends – and the eligibility ensures it’s helping the income earners who genuinely need it.”

Roby Sharon-Zipser, CEO of online tradie platform Hipages, told realestate.com.au the cash incentive was a “well considered” solution for both short and long-term issues, as the industry attempts to stabilise. “The number of new construction dwellings was going to drop significantly this year, from about 180,000 to about 130,000, leaving around a third of the industry without work,” Mr Sharon-Zipser said. “[The scheme] solves a short-term problem, until the economy and migration get back on track, but also longer-term it keeps apprentices in the job – keeping them trained and qualified for when things go back to normal. For Australians who probably would have put off the decision to build or renovate, it’s the thing that will get them over the line."