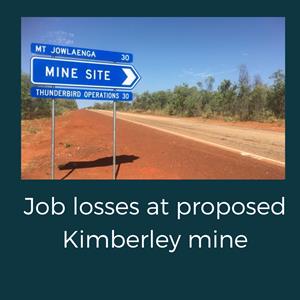 It was supposed to be a new mine worth half-a-billion dollars, built in the west Kimberley and employing local Indigenous people.

But now Sheffield Resources has announced the majority of local employees for their prospective Thunderbird mine will lose their jobs. The proposed mineral sands mine in west Kimberley was already having difficulties raising funds with a slowing Chinese economy when the coronavirus struck and pushed the project into survival mode.

Managing director, Bruce McFadzean, said they raised more than $300 million for the project, situated between Derby and Broome, but it was not enough. "There's only $150-odd million outstanding from equity, and the equity markets aren't strong," he said. "So we've got to look at ways and methods where we can get this project funded." While the company looked for a new path to construction, operating costs had to be cut and that meant the majority of positions in the Kimberley will be lost. "Similarly in Perth too, we have a reduction in numbers," Mr McFadzean said.

Hopes were high when Sheffield Resources gained Federal environmental approvals in 2018 to extract zircon and titanium dioxide from mineral sands. The project offered 400 jobs in the Kimberley during construction and 280 direct jobs over the 42-year life of the mine. It was an attractive proposition and enjoyed support to the tune of $95 million from the Federal Government's Northern Australian Infrastructure Facility to help fund mine construction. In 2018 the company reported it was already employing 14 people in the Kimberley as well as creating Indigenous traineeships. Now the majority of those positions have gone.

"This change will be difficult for our employees and other stakeholders," Mr McFadzean said in a statement this week to the stock exchange.

As far back as the start of 2019, Sheffield Resources was downplaying rumours that they were struggling to raise adequate funds. At the time Mr McFadzean said he hoped to announce a deal that would complete what was then more than half-a-billion dollars in construction costs. "We would expect that to conclude in this half [of 2019], and we would move the project forward into construction in the second half of this year," he said in February 2019. But no deal was struck and now the share price, which had declined throughout 2019, has dropped by a third since the start of 2020.

Resources analyst, Tim Treadgold, said Sheffield's difficulties had been exacerbated by the effects of the coronavirus outbreak on the Chinese economy. "The overall picture is pretty grim, you can't get the money to build the project, the market for the product is weak, and now your biggest potential customer has closed its doors," Mr Treadgold said." Geologically it looks like a good project, in normal circumstances it would go, but it's had this nasty confluence of factors." Despite the latest announcement that jobs will now be cut, Mr McFadzean said he still hoped it could proceed if they could reduce the cost of construction. "Hopefully we can get this done in the coming year or so, and we can get this project built and get that benefit for everybody," he said.