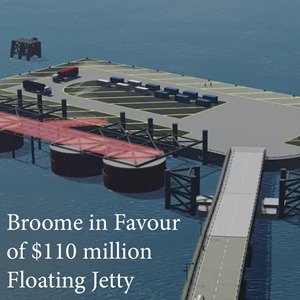 Broome residents have voted overwhelmingly in favour of a $110 million floating jetty for the town which could help triple the number of visiting cruise ships and aid the oil and gas industry.

More than 200 ratepayers let their feelings be known on the project — the single biggest privately-funded development in town since the Cable Beach Club Resort — when they crammed into the Shire of Broome public gallery for the annual electors’ meeting on Thursday.

Just four out of about 215 people voted against a motion from ratepayer John Davidson for the council to reaffirm its support for the Port of Broome to become a more significant and effective logistics hub and marine support base. The vote crushed any doubt it was not wanted by the community.

Included in the proposal is the privately-funded floating jetty that Mr Davidson said would be transformational for Broome and the West Kimberley in terms of creating 220 direct jobs during construction and 500 new positions when fully operational.

“The region needs transformational infrastructure such as the Kimberley marine support base facility to accelerate growth in our local economy, which in turn will increase living standards in all sectors of the community,” he said.

Mr Davidson said an overall increase in port capability would benefit the oil and gas industry and allow potential expansion of the cruise ship industry from 20 passenger liners each year to more than 60, provided access to berths and suitable embarkation facilities were available.

He said provision of cost-effective container loading facilities would kick-start competitive exports of local produce such as chilled beef and a variety of aquaculture and horticultural products to South East Asia.

The Kimberley Marine Support Base proposal includes on-shore terminal facilities and would be fully-funded and constructed by the KMSB, which would enter into a commercial lease with the Kimberley Ports Authority.
The plan already has State Government support and is awaiting final environmental approval for construction.

“Clearly the backing from the community last week shows they support this council’s direction and commitment to delivering responsible economic growth in the town,” he said.

KMSB director Andrew Natta said he was overwhelmed by the community response.

“This is a project that is for the benefit of all — we are taking a low impact solution, we are listening and working with the community and very excited for the opportunities this will present,” he said.

KPA chief executive Craig Faulkner, who attended the meeting, said he was delighted the motion supporting future development of the port was agreed by ratepayers.

“The port as one of the primary facilitators of trade and commerce through the region is entering an exciting phase of development of new infrastructure, with the KMSB construction poised to commence soon,” he said.

This will support all of the existing industries and users of the port and give the port significant capacity into the future to grow these industries and provide the basis for regular shipping services importing and exporting general cargo to and from the Kimberley, as well as support future economic growth.”

Broome Chamber of Commerce and Industry president Peter Taylor said it once again confirmed the town’s silent majority were “undeniably” for economic growth, additional jobs and a continued diversification of the economy.