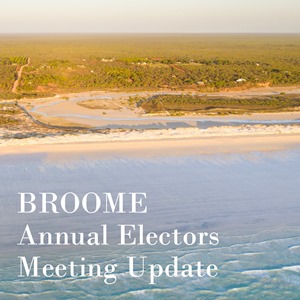 The Shire of Broome Annual Electors Meeting was held at the Shire Offices and although due to commence at 4:00 pm was delayed to allow a large attendance to register and try and find some space in Chambers, it was standing room only at the end with numbers still outside in the hall.

In my time in Broome, over 30 years, I have never know an attendance of more than a “handful’ of electors in attendance at the Annual Electors Meeting. Broome businesses were very well represented and many of our team were permitted to leave our office early to take part as there was serious concerns that the “anti development” lobby that had successfully promoted a number of nominees at the recent Shire Elections were proposing to oppose the Kimberley Marine Supply Base project.

During a very orderly meeting the first motion proposed by an elector was for the Shire to advise the Premier, Minister for Transport, Kimberley Ports and the proponent that the project had the full support of Broome electors, the  motion was carried with the visible votes against being less than the numbers of fingers on one hand.

A number of other motions were proposed by electors, being relevant to the current epidemic of juvenile crime and seeking full support from all agencies of government, energy reduction proposals, weed and ferel cat control and addressing the registered charities legislations that were all passed. A motion proposing to have Broome with zero green house emissions by 2030 was lost.

More details including the full correct wording of all the motions and attendances etc will be available on the Shire’s website.

The silent majority came out in force.