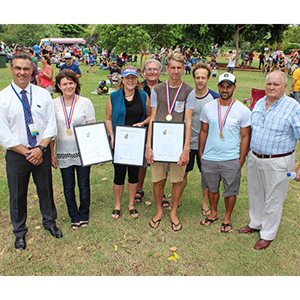 Released 26 January 2017
Lee Anderson, Seth Lovell and the Broome Sports Association have been recognised with Community Citizen of the Year Awards during Australia Day celebrations in Broome.

Eighteen new Australians were also welcomed at a Citizenship Ceremony during the event at Town Beach.

“The Community Citizen of the Year Awards acknowledge and reward people and groups for their contributions to community life,” Cr Johnston said.

“Our Community Citizen of the Year, Lee Anderson, is a founder and driver of the Kyle Andrews Foundation and has made an immeasurable difference in the lives of sick children in Broome and further abroad.

“With Kyle’s Camp celebrating its 20th anniversary in 2017, her contribution has been sustained and has served to galvanise our community behind a common cause.

“At the age of just 17, Seth Lovell has represented Australia as an Under 20 at the junior world championships in his chosen sport of Ultimate Frisbee, as well as representing WA at an Under 22 level.

“Despite a long list of sporting accolades, he is best known for his integrity and sportsmanship, his coaching of juniors, and his work as a pioneer of this developing sport.

“The talent program supports and develops our town’s best young sportspeople, while the awards have been a big success and in 2016 received a record 54 nominations, with 11 award winners and 23 different sporting organisations represented.

“I congratulate Lee, Seth and the Broome Sports Association for exemplifying community spirit.”