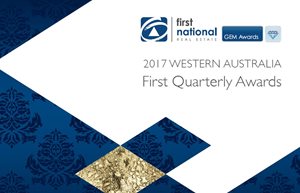 First National Real Estate WA members were presented with their General Excellence and Marketing (GEM) Awards for the January to March quarter for 2017.

The GEM Awards recognise hard work and teamwork, and Principal Mr Griffiths said “it’s great to see it’s not only senior staff being recognised but all positions within our Agency. On many occasions we’ve received positive feedback about our receptionist Tia who was nominated as receptionist of the quarter.”

Allan & Brenda have owned First National Broome for 27 years and early on recognised training and promoting within their own organisation was crucial to surviving in a remote town. Mrs Griffiths said “we appreciate being part of the First National network and the opportunities the awards give to show our appreciation for the commitment and dedication we see every day from our team.”

The team at First National Real Estate Broome were recognised for:

The First National GEM Awards are an important event as they present an opportunity for members to come together and celebrate their achievements as well as to learn about the systems and processes that enabled their colleagues to win awards.