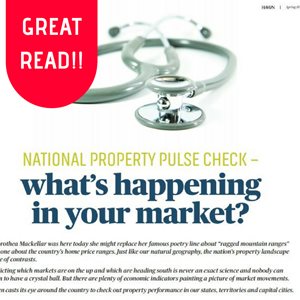 In the most recent newsletter released by North West Finance they gave a wrap up of the current market in Australia.

For Western Australia they reported:

PERTH
Patience might be the key to Perth’s market, which looks like it is finally bottoming out after sliding with the resources sector. There are mixed predictions for the next few years. Some market gazers tip further, minor dips, while others claim the economy is rebounding with strong jobs growth and increasing export demands.

ELSEWHERE
Nowhere has the mining slump been felt more keenly than regional Western Australia. The brunt has also been borne by nonmining towns, including Bunbury and Broome, but green shoots are peeking through. Bunbury is looking to shed its image as just an industrial port with investment in waterfront, lifestyle precincts and a digital economy.

Broome, once dependent on its pearl industry, is looking to capitalise on food production. How Western Australia diversifies and sheds its reliance on mining will have a big impact on its regional economies and property markets.