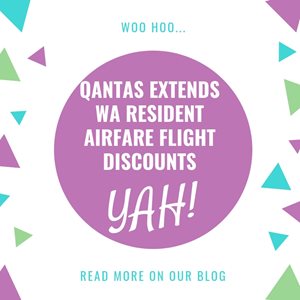 Perth Now reports that QANTAS has announced it will extend it’s discount on airfares for residents of several regional WA towns. A trial of the residents’ fare program began in November 2017, with airfares to nine regional cities in Australia discounted by 10 to 30 per cent for four return flights a year.

The national carrier announced today the trail would be expanded, and increased to 12 return flights per resident a year. More than 6,000 flights were booked using the scheme over the trial period, according to Qantas.

The WA towns included in the trial are Broome, Karratha, Kalgoorlie, Newman, Paraburdoo and Port Hedland.

Qantas domestic chief executive Andrew David said the extension of the program was part of the airline’s effort to make it easier for residents in remote cities to access affordable air transport. “We’ve seen a strong uptake from residents taking advantage of the discounted fares,” he said.

“The reality with regional travel is that the per kilometre cost on a small aircraft is significantly higher than a larger aircraft that operates between major cities, because the costs are divided by a much higher number of passengers. These regional routes don’t have the levels of demand needed to sustain a much larger aircraft and we want to maintain the frequency of services. There are some fundamental realities about the costs of operating regional services that we can’t change, but this program is a good example of how we’re working to make sure travel options are both accessible and sustainable," added Mr David.

Qantas is in ongoing discussions with regional airports and Councils about reducing airport fees and charges, which they claim would enable further savings on airfares.

Kalgoorlie-Boulder is the only WA town to reduce fees so far.

Original article can be viewed here.