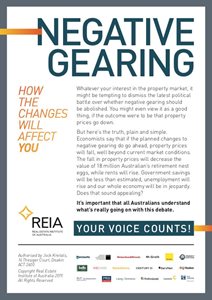 The Australian Labor party is going to the federal election with a risky housing tax policy that will exacerbate already falling house prices, force up rents and threaten the broader economy.

Labor’s strategy to halve the capital gains tax discount and restrict negative gearing to new properties ignores current economic reality and is misleading Australians about who would really benefit.

Under Labor’s plan, property investors wishing to buy older style properties will be prevented from claiming interest payments ag ainst their incomes , and the capital gains tax break they currently receive would be halved.

A Property Council of Australia survey has shown that nine per cent fewer investors will be prepared to buy new properties , if Labor’s proposed crackdown on neg ative gearing is implemented.

If Labor wants to treat property investing differently from all other forms of investment, it’s ordinary Australians that will pay the price . Property investors will no longer be in a position to access the kinds of taxation benefits they currently enjoy; fewer rental properties will be bought, rents will go up, house prices will fall, and negative gearing benefits will be restricted to top end of town - share brokers and bankers who negatively gear shares.

When Paul Keating experimented with negative gearing in the mid 1980s , rents increased and the changed policy was ultimately dropped. For anyone thinking things are different now, The Centre for International Economics recently confirmed that its modelling shows rents will rise, and that will of course be a direct hit on young Australians saving to buy their first home.

All the analysis has shown, time and time again, that scrapping negative gearing will have negative impacts. Two thirds of Australians with incomes under $80,000 use negative gearing to save for their futures, not the top end of town as voters are being led to believe.

Source Real Estate Institute of Australia.
The Property Council of Australia poll of more than 1,000 people was conducted by Newgate.
Centre for International Economics report commissioned by HIA (December 2017)