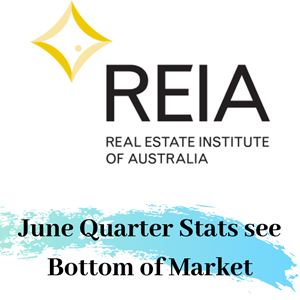 The decline in property prices continued in the June quarter and will most likely mark the bottom of the cycle, according to the latest research from the Real Estate Institute of Australia.

Mr Kelly said whilst the total number of new finance commitments for the quarter were down 15.1% over last year, including first home buyers down 7.6% it needs to be remembered that the Federal election was held in the middle of the quarter. “There was considerable uncertainty regarding the outcome and concern about changes to property taxation and its impact should there be a change in Government.

“With the post election boost in confidence in the real estate market as evidenced by higher levels of enquiry, two cuts in interest rates and changes in APRA’s requirements, the June quarter will most likely mark the bottom of the cycle. Lending figures for the month of June 2019 show, in seasonally adjusted terms, that the number of owner occupied finance commitments excluding refinancing increased by 0.4 per cent. The value of investment housing commitments, excluding refinancing, increased by 0.5 per cent in June with the rise driven by the first rise in New South Wales since April 2018.”

Mr Kelly said over the quarter, the median rent for three-bedroom houses decreased or remained steady, except for Hobart. The median rent for two-bedroom other dwellings also either decreased or remained steady in all capital cities except Darwin. The weighted average vacancy rate for the eight capital cities remained stable at 2.7 per cent during the June quarter.” The Real Estate Institute of Australia (REIA) is the national professional association for real estate agents in Australia.

What about locally in Broome?

The past few years in Broome have been sluggish so we are pleased to report  in July we did see a more positive buzz.  Our sales team has been kicking goals with realistically-priced properties experiencing good inquiry levels. Sales have predominantly been for properties under $550,000 and currently for this financial year we have 9 properties Sold and 5 Under Offer.  We do encourage our clients to approach the market with caution and not expect unrealistic growth expectations just yet.
Another positive buzz with our Sales Team has been with both Fraser and Lana being recently recognised in the REIWA awards. If you are thinking of putting your property on the market, you can be sure our agents will handle the sale with the utmost professionalism and skill, whether it is a one-bedroom unit or a family home. Our commitment and dedication to our clients means we are constantly striving to help more buyers and sellers secure their real estate dreams.
Our PM Team has lived up to its reputation as being Broome’s leading Leasing agent with 222 properties so far this year being negotiated while keeping our vacancy rate down at 1%. Hopefully a sign of good things to come.
If you'd like an up to date opinion on the value of your home arrange a free appraisal here.