Broome's Getting a Bike Park 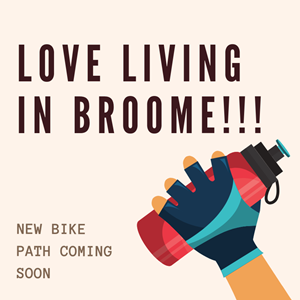 Broome's Getting a Bike Park

The wheels are in motion on the first stage of the new BRAC 1 Youth Bike Precinct as construction gets underway.

The new facility is being created on vacant land off Frederick St between Broome Recreation and Aquatic Centre and the Boulevard shopping centre and is being undertaken in stages as funding becomes available, with construction of a mountain bike pump track the first project underway.

An $85,000 grant has been secured from the WA Department of Local Government, Sport and Cultural Industries and the remainder of the $220,000 construction cost is funded by the Shire of Broome.

The master plan for the site was developed through community workshops and consultation, and in addition to the pump track will eventually include mountain bike and walking trails, an informal dirt jumps area, BMX track, shade, seating and drinking water.

“As a Council we want to provide activities for our young people that encourage them to be active and healthy, and the BRAC bike park is a really exciting project that’s been in planning for a couple of years,” Cr Tracey said.

Base works are now underway with construction of the pump track scheduled to start in October 2019 for completion before the end of the year.